I met Annabelle in 2001, while pillaging vast amounts of free music from Napster, the nascent 21st century’s first major foray into the future (our present) world of peer-to-peer free file sharing .
As most people know by now, a peer-to-peer file sharing site isn’t so much a digital warehouse of free stuff, waiting to be looted, as it is a library where each person has possession of an individual page of content and all must be present so that the files can be reconstituted and checked out (downloaded). Its inventory and growth depends on the contributions of its community of users. To facilitate this community and encourage the culture of sharing, one of Napster’s key innovations was the Instant Message feature it included in its software. This is how Annabelle first contacted me, accompanied by the synthetic ‘bloop!’ that annoyingly signaled a new message:

To which I replied:

After a short and confusing exchange (it was clear that English was not Annabelle’s first language, and my only), I figured out ‘Divine Comedy’ was a band that I unknowingly had in my library, and which had attracted Annabelle to my music collection. I was at that time in the deep end of my decades-long obsession with Magnetic Fields, and Divine Comedy had recorded a version of the Fields’ song ‘Famous’ that I had hoovered up during a data binge on all things associated with Stephin Merritt’s flagship band . Appropriately, our friendship began with a cover song.
Annabelle and I started corresponding on Napster on a regular basis, trading music and occasionally revealing details about ourselves. She was 21 (I was 25 at the time). She lived in Paris, after running away from Poland as a teenager, after a difficult childhood. I lived in a dilapidated house in Columbus with two other alcoholic artists. There was a hole in the ceiling over my bed that let rain through. She worked as a contributing editor at a music magazine called 'Rock Sound'. I was at that time the manager of a Laundromat north of the Ohio State campus.
We shared our music collections with each other, and realized we possessed the same predilection for melodic, moody tunes that tended towards the electronic-flecked and the European. I mailed her a CD. She mailed me a mix tape and a complimentary copy of her magazine(included with this volume). I mailed her the postcard from my B.F.A. show. We became friends.
When she offered to send me a photograph of herself, I told her not to. After graduating, I had been somewhat listless; I needed a new project to focus my energy. So I decided I would draw a portrait of Annabelle, using only her written instructions as a guide. I would keep making new drawings until I made one that she felt resembled her.
She liked the idea and agreed to collaborate. So I got some basic information from her (color/length of her hair, color of her eyes, and a short list of public personalities she resembled, or had been told she resembled). With this information, I drew four pages of portraits, with four to five portraits on each page. Since English was Anya's third language, we quickly worked out a system in which I would number the drawings so she could easily refer to them when she sent me the corrections.
You can see the numbered system at work in the correspondences included in this volume. I have included all the corrections that Annabelle communicated to me, with the exception of perhaps a handful of email correspondences that were lost when MSN.com partially purged my old email account.
In the interest of space, I have for the most part edited out personal email correspondences between Annabelle and myself. I have also omitted my half of all correspondence, with the exception of a copy of the postcard from my BFA show that I mailed to Annabelle. I have also included two pieces of art that were peripherally linked to my thinking during this project: a copy of a hand-drawn flyer for a lost dog that I pilfered from the bulletin board at the Laundromat where I worked in 2002, and a copy of a comic-strip painting that featured Annabelle and the dog from the flyer, based on a dream I had.
Annabelle and I collaborated on this portrait from 2001 to 2006. During that time, I moved from Columbus to Brooklyn, began and completed my Master’s of Fine Arts Degree at Bard College, and built the loft in Sunset Park, Brooklyn, in which I live/work today.
In September 2006, Annabelle judged our project complete and flew to New York. I met her at JFK. It was the first time I saw her in person. I’d say my pictures are a reasonable likeness, but you would have to take my word for it. She spent six days as my guest in Brooklyn. She returned to New York for a short internship later in November of that year and accompanied me to Thanksgiving dinner with friends. I have not seen her or spoken to her since then, though we keep sporadic contact through email.

Today, Instant Message is a feature of every social media site and email account. My handle is ‘Pat Palermo’. 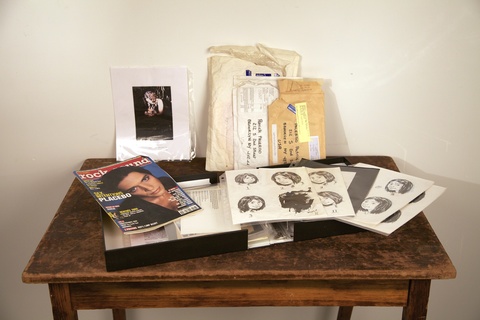